Dungeons and Dragons uses the four elements – earth, air, fire, and water – throughout its books. There are elemental monsters, spells, and even elemental planes. So it makes perfect sense to have elemental puzzles in your D&D world as well.

In this article, we’ll look at two puzzles you can use to represent the four elements. There are:

They both have a very different approach to using elements in your game. So let’s dive right in.

The first elemental puzzle we recommend is Runestone Puzzles. This puzzle wasn’t specifically designed as an elemental puzzle but we are using it that way and it works very well in our opinion.

These puzzles come with three types of Runestones. 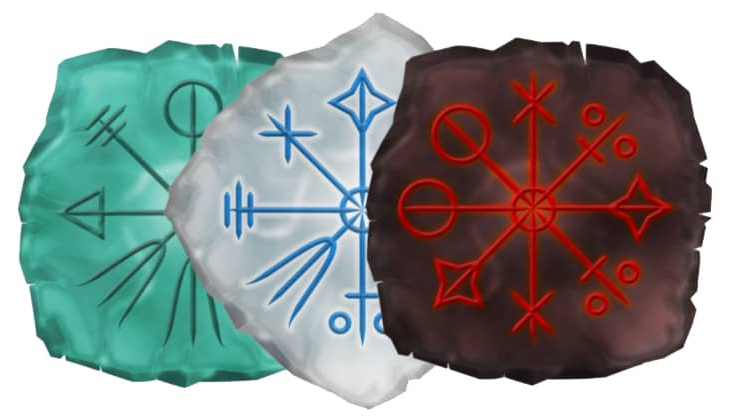 That takes care of the elements but what about the runes on each stone? In Dungeons & Dragons there are four elemental languages:

These languages together form the primordial language family. The official D&D material gives no grammar of script for the languages so we are free to use the runes as the basic primordial script.

Now that each stone is given an element and the runes correspond with elemental languages, it’s time to look at the puzzle itself. How does it work? 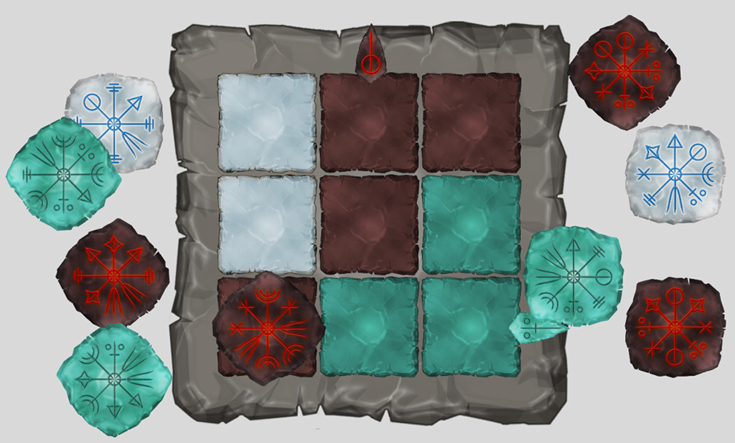 Each elemental runestone also has eight runes inscribed on it. Players need to rotate the runestones so that the runes all match in horizontal and vertical directions. The board also often come with single runes that also need to match.

A nice benefit of this puzzle is that you can place it in the middle of your gaming table and players can watch and play it from all sides. You can also distribute the elemental stones among players. And it’s even possible to only allow one or two players per element to be able to manipulate the stones. This ensures that no one player hogs all the stones while the rest of the group waits until he finishes the puzzle.

Another great aspect of this puzzle is that it is a whole system for creating new puzzles. So you can create an infinite amount of new elemental puzzles for your game.

Runestone Puzzles is available in our webshop and comes with everything you need for tabletops and virtual tabletops.

Our second puzzle is appropriately called Elemental Puzzles and was created by the same puzzle designer. Here’s how it works:

This is very similar to our last puzzle but it is also where the similarity ends. With Elemental Puzzles players encounter a 5 by 5-inch board. You can place this board upon a pedestal but it’s also possible to use it as a map to place tokens on. With the last setup, the puzzle can double as a great combat encounter area but more on that later.

Each Elemental Puzzle has a central five-by-five grid surrounded by a border containing clues to solving the puzzle. The rules are as follows: 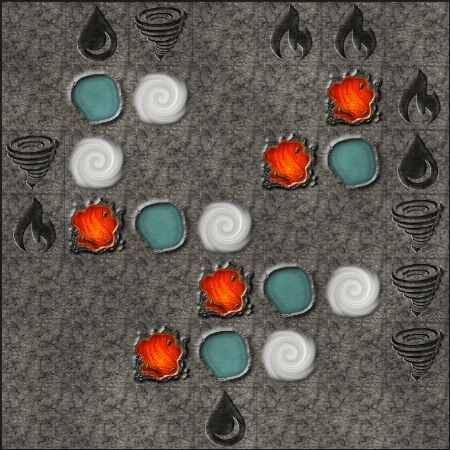 When the player solves the puzzle a door opens, a portal appears, or whatever you as a DM decide should happen.

But, as we mentioned earlier, the finished puzzle is also a great combat encounter area. So you could have enemies attack and use the board of the elemental puzzle for terrain. This works perfectly for both physical and virtual tabletops because the squares are already 1 by 1-inch in size.

You can assign an effect to each square. The puzzle designer suggests the following effects but you can choose whatever effect you wish:

To make this puzzle work at any level without having to worry about damage output, you could judge players who are in a fire square have disadvantage on everything. We really like how you keep the action going and use the hard work players put into solving the puzzle to create an interesting combat encounter.

Elemental Puzzles is available in our webshop. Be sure to check it out.

The two puzzles we’ve mentioned in this article and many more, also come in a bundle called the Puzzle Bundle. You get hundreds of puzzles at a very low price.

But if you want even more value for money there’s also the Vault Bundle on our affiliate’s website. Not only does it contain everything in the Puzzle Bundle, but it also comes with over 400 Animated Tokens. And one of those token packs has 40 animated ELEMENTALS. They look amazing. Animating these must have been so much work.

So if you plan to run an elemental heavy campaign, we highly recommend checking out these tokens as well.