Our party has always wanted to run a political D&D campaign. We imagined it to be filled with political backstabbing and double-crossing, shady deals, and broken alliances. But after only a few sessions I felt I had bitten off more than I could chew as a DM. And my players complained they felt like spectators to an – admittedly – very dry and dull story.

Things needed to change and I needed help.

I usually only write about puzzles on this blog, not politics. But when I spoke to my affiliate – who creates puzzles for our webshop – he pointed out having created an entire system for running politics in D&D that is ALSO a puzzle system.

Political Puzzles. It sounded too good to be true so our players gave it a try. And in this article, I’ll share how it went and the surprising things I’ve learned.

When I started, I wasn’t sure how to run politics in D&D.

As a general rule, you can run politics in D&D by creating multiple factions that each hold political power. These factions can form alliances or be in opposition. In D&D you gain political power by protecting your followers and creating the most powerful alliances.

Here’s how to run politics in D&D in four easy steps:

1. Create the Political Landscape in D&D

“Politics is war by other means.” – Carl von Clausewitz.

The first surprising thing I learned is that running a political campaign isn’t that much different from running combat. For combat encounters, we use a map and miniatures in D&D because there is just so much to keep track of. Trying to do it all in the theatre of the mind would be very difficult.

But running politics with all those factions and how they view each other is even more complex. We need a visual system to keep track of everything and we also need rules that give us a clear idea of what we can and cannot do. Just like there are rules for what a character can do in a round of combat, we need rules for what factions can do in the political arena. 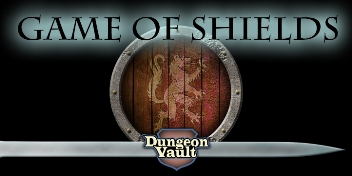 The Game of Shields (what the political puzzle system we’re using is called) provides both the visual system and a very clear set of rules.

With the Game of Shields, every faction in a political arena receives a heraldic shield to symbolize its political views, called aspects.

So how do you choose which shield fits the faction your party belongs to or is leading? In our campaign, our entire party led a faction.

So the Heraldic Shield name of our faction is: ‘Two RedHeart Wolves’. 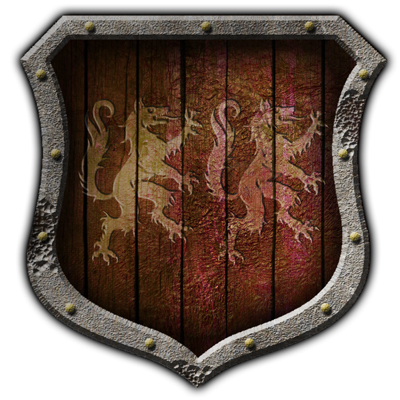 In the Game of Shields, there are 81 heraldic shields to choose from which gave us more than enough variety to create an interesting political arena.

In our experience, creating an arena of up to ten political factions works really well. We chose heraldic shields for each faction which worked out very well. Just by seeing the different shields laid out together, you can immediately see in what aspects different factions match and where they differ.

For example, in our political arena, there was a faction that was also red meaning we understood each other when it came to things such as war and combat. But this other faction used Griffon symbols meaning it was lawful – a party of classic paladins in fact – and in this regard, they did not match our band of outlaws.

Just having those shields helped us see where we matched and differed from other factions very quickly. It took about half a session to get used to but once I can see each NPC’s political standing I was able to roleplay them much faster and my players could also see their shield and know where they stood politically. (I used the shields as badges to make it even more clear).

Just having this helped a lot and we haven’t even gone into how to use the shields for political puzzles and creating and breaking alliances. But before we dive into that. Let’s look at how to create a faction from a storytelling perspective.

2. Create a Political Faction with Followers

In our campaign, the party were outlaws who were banished from a Kingdom. They traveled to the neighboring Kingdom and found a village with 7 existing factions each petitioning them to join. But the players decided they did not want to be followers and looked for opportunities to form their own faction.

That’s when I decided that more outlaws and bandits were hiding in the woods without a real form of leadership. In a series of adventures, they helped the outlaws to organize and protect themselves. When they had enough power to be of consequence in the world, I let the players choose a heraldic shield.

The great thing about this setup is that it starts and ends with storytelling. The party needed to find ways to gain the outlaws’ trust and I created combat situations and other problems for them to solve. It wasn’t the dreary politics I did the first time but action-packed which puts the characters in the middle of the story.

And that was another surprising discovery. Political campaigns can be very action-oriented. And having players really earn the right to call themselves a faction and start wielding political power was very much the feel we were looking for.

BTW, if you just want to use the puzzles without the politics, you can. We have an article about it here.

With the Game of Shields, you can shift political power in your direction by creating alliances and by breaking your opponents’ alliances.

But you can’t simply choose any faction to start an alliance. Each alliance needs to be carefully balanced. And this is where the puzzle portion of the system comes in. Here are the rules in a nutshell:

In order to maintain a fair balance between aspects, a faction must always consist of three factions.

A faction must have either have:

1. All the SAME aspects.

What you absolutely can’t have is a faction that has two colors that are the same and one that differs. The reason is that the two factions with the same color would have an unfair advantage over the third faction with a different color. So this third faction would never consider entering an alliance where they were at such a disadvantage.

For roleplaying purposes, this meant that on any aspect the factions either completely agreed or disagreed so completely that they kept each other in balance.

In truth, having to work with these limitations first put me off a bit because I wanted to be free to created alliances of fewer or more factions. But after having played with this system for a while I realized that this was exactly the limitation our game needed to keep it from devolving into a meaningless mess.

Just like the combat we mentioned earlier needs rules and limitations, so does running politics need limits that players can oversee. And having limited choices helped us from becoming overwhelmed with the possibilities. We also soon found that we could make more than one alliance to grow our political power even further.

And then there’s breaking the alliances of your political opponents. The system gave us very specific ways we could break alliances. Such as:

4. Alternate Between Political Decisions and Action 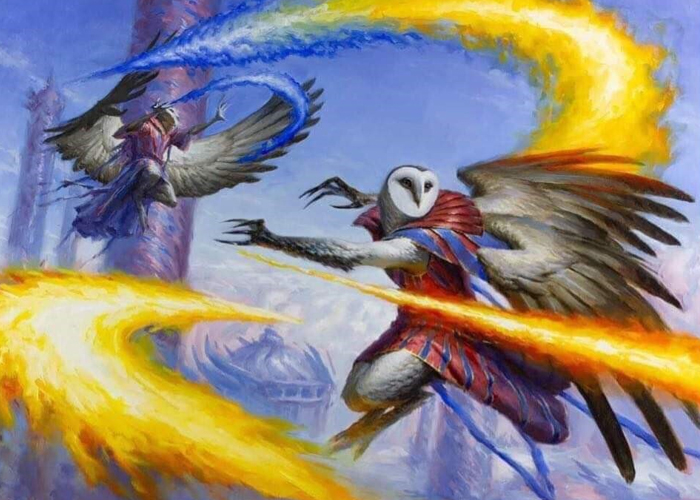 Creating and breaking alliances is a puzzle in the sense that players get shields and puzzle out what alliances are possible. But it is also a system to help players decide on a course of action.

For example, after looking over our political arena we found that we could create only one alliance at the moment. So we set out to win the favor of our partners through a series of action-filled challenges.

Through adventures, we managed to form our first alliance. But our alliance still wasn’t as powerful as our opponents” in the political arena of our town.

We broke their alliance by manipulating one faction to change its shield. We puzzled out that if we could get a faction with a circle to change into an arrow, we wouldn’t only be able to break our opponents’ alliance, but the changed faction could also align with us, making our faction the most powerful in the arena.

The Verdict: Is the Game of Shields a Good System for Running Politics in D&D?

The short answer is Yes.

Dungeons and Dragons works best when the characters get to act and use their powers. And with the Game of Shields, you constantly alternate between making political decisions by solving a puzzle and having action-packed adventures where we set our plans into motion.

This gave all of our adventures more meaning. We weren’t simply following a storyline that I, the DM, created. Instead, players had proactively created a plan they were executing with the intent of gaining more political power.

The action was just as much fun as you get with more of a railroad-type module. But this felt more like a very well-structured sandbox game where the players set the goals and the DM just had to make it challenging.

I did find having to use three factions to create an alliance a little limiting but without such a clear system my players would probably have spent hours discussing what to do without ever coming to a conclusion. So having a system with very clear choices that direct players towards actions they take is absolutely indispensable. It’s a bold design choice and it works.

You can purchase the Game of Shields from our affiliate on their website here.